Presentation brochure!
System cabins for the passage of one person

System cabins for the passage of one person

In technologically and security complex structures, such as banks, post offices, facilities for defense, different system areas, cash safes, etc. we are faced with the requirement to limit access to only authorized personnel. The classic access control with an electronic lock on the front door is not sufficient because it does not provide transition for only authenticated personnel through the open door. Therefore, for such strict conditions, additional measures need to be taken which allow passage only to authenticated personnel. For this purpose there are prefabricated cabins that limit passage, but they have technical shortcomings with transporting equipment. As a result of our own development, a system limiting the passage of personnel has been created. It combines traditional access control, control of two serial ports and restricting passage to one person.

Cabin for the passage of one person NTR KOP 1.1E is a ready-made technical system, that offers and ensures optimal protection of access to only authorized personnel. At the same time it does not present an obstacle in cases of maintenance, transport of equipment and similar interventions in the system. Cabin is designed and manufactured for each building individually in accordance with building gabarites. 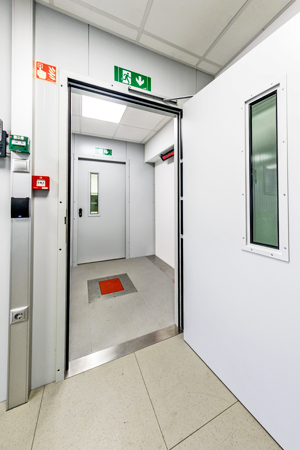 It enables the creation of highly secure technology zones, where there is equipment or other valuable items that need to be secured. By high level of security and strict limitation of passage for only authorized personnel, provided by the cabin, we can ensure comprehensive protection against unauthorized access to rooms, equipment or items. Typically the cabin is used in restricting:

The cabin for limiting transition is essentially composed of the following systems:

The basic concept of the booth limiting the transition, is a system of double doors with prevention of simultaneously opening both doors (interlock mechanism). To ensure the transition of authorized personnel only, one at a time, this system is upgraded with advanced two zone system of weighing and limiting the size of the person passing in the cabin.

NTR KOP 1.1E is a technological system that offers effective limitation of access to areas or equipment. It provides proven protection and integrates the following technical features: